Shadow Behind the Moon 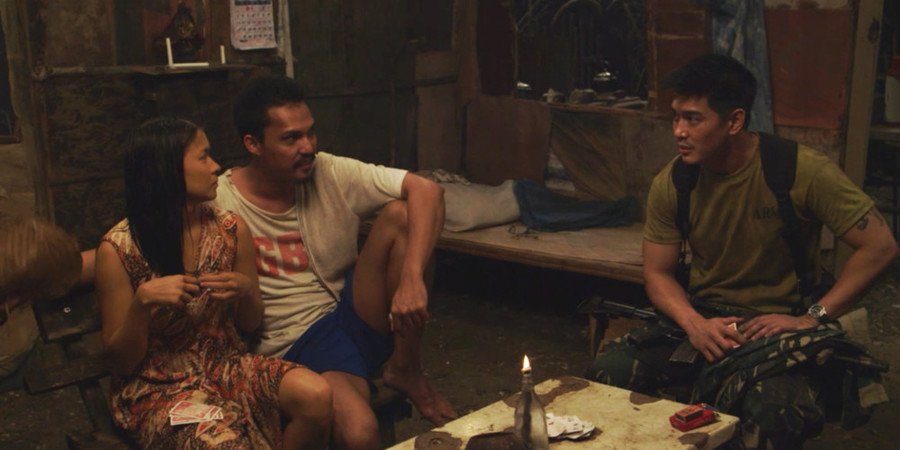 A shocking psychodrama of three actors, made in one shot. It is 1993, fights between the government and a communist guerillas have been going on for years. Emma and Nardo, a young married couple, finds shelter in a home somewhere between the front lines. From time to time they get a visit from their friend Joel, a soldier. This night is good for playing cards, but the real game will be played on a whole different level. What is the real reason for the visits? Who is on who's side?

Step by step revealing the emotional and idealistic stakes each character fights for, Lana constructs an intelligent, surprising plot. The action is set on the night of lunar eclipse, the scenography is just a house and a small piece of nature around it. But it is enough to build a claustrophobic space with many nooks and corners: the jungle just out the door, which resonates with the sounds of distant shots, becomes a dark witness of the events, which surround the characters. It is also the space beyond law, a no man's land, where the most primary instincts come alive – arousing passion, which is hardly be subdued by political preferences. The simple, experimental form brings emotions to the front: the secrets and lies piling up between the characters become a metaphor for the relations in the internally-divided country.

Born in 1972, award-winning screenwriter, laureate of 11 Filipino Palanca literary awards, he received the first one at the age of 19. Author of screenplays for films by Marilou Diaz-Abaya and Maryo J. de los Reyes, as well as many TV series. In 2006 he made his debut as a director with "Gigli." His 2013 film, "Bwakaw," was a Filipino Oscars candidate.