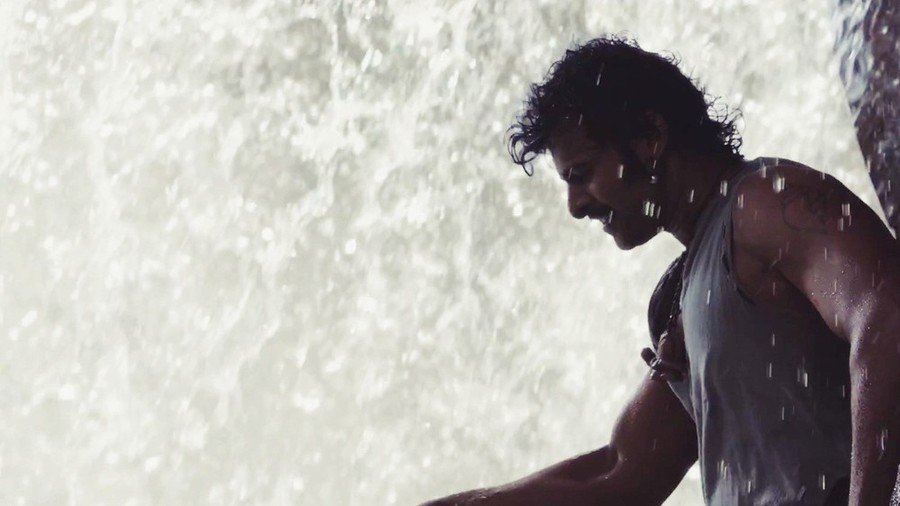 A half-naked hero with muscles like stones, singing along as he climbs a kilometer-high waterfall, deflects hundreds of arrows with one swift stroke of his sword, makes sleigh out of a piece of rock to save his beloved from a monstrous avalanche? A modest robe of a rebellious female warrior turning into purple silk under the hero's fingers? Hundreds of soldiers, elephants, and flamethrowers in spectacular battle scenes? This is only possible in Indian cinema. And this time the filmmakers really outdone themselves: the most expensive blockbuster in the history of India is truly breathtaking.

"Baahubali: The Beginning" broke all attendance records, even before its premiere viewers queued for hours to buy the tickets in advance. The Telugu film appeared simultaneously with its dubbed versions in Tamil and Hindi smashing box offices in India and abroad. It is the biggest success of Tollywood – the cinema of South India, which challenges the Bollywood films from Mumbai and questions their monopoly on Western markets.

Two parts of this epic story took over 3 years and 40 million dollars to produce (the training equipment on which the superstar, Prabhas, worked on his divine figure alone allegedly cost two hundred thousand). Two thousand extras and stuntmen participated in the production, another thousand people worked daily on the desert-build scenography. and the digital special effects were prepared by six hundreds specialists in sixteen studios.

But it is not all about the production's grandeur. "Baahubali" is a compelling epic saga with roots in Telugu tradition and the Mahabharata, a close relative of the universal legends of destiny, valor, and family ties – from Greek myths and the Hercules to the Bible story of Moses and the struggle against evil in "The Lord Of The Rings." The impressive visual imagery of S. S. Rajamouli (with a generous splash of CGI) takes us for a journey through Indian deserts, foggy forests, a dazzling splendor of ancient city, and the dynamic plot provides a wide spectrum of emotions: from pathos to comedy, from surprise to the sublime.

Born in 1973. Grew up in a family of filmmakers, as the son of director K. V. Vijayendra Prasad. He started his career in 2001. All his film were major box office hits, some were remade in Hindi. He is praised for broadening the scope of Tollywood cinema - brilliant use of new technologies, introducing fresh subjects, production grandeur and impressive visual imagination. His experimental fantasy film, "Eega" brought him over 30 awards at various festivals.