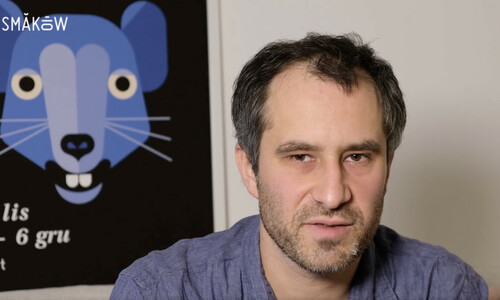 Yeji is a make-up artist working for a capricious celebrity who likes to unload her frustrations onto her subordinates, indiscriminately pointing out their beauty flaws. Tormented by successive failures of her life, Yeji starts to blame her own appearance and becomes increasingly depressed. Unexpectedly, an anonymous package with a mysterious cosmetic that promises a magical makeover appears on her doorstep. The effects are truly spectacular, but what price will have to be paid for the stunning beauty?

The adaptation of the popular online comic is an example of an independent auteur Korean animation, which is flourishing in recent years. Definitely intended for the adult viewer, the plot is a combination of a dark surrealistic fairy tale and
a bloody body-horror, and at the same time a devastating satire on the unrealistic beauty standards in today's Korea and an Internet and media culture based on images polished to the limit.

Co-creator of an independent student animation collective, Animal. In 2000 with one of the members of the collective, director Goo Bong-hee, Cho formally established the animation house Studio Animal. Their first film together was
a Flash animation called "Revenge Impossible". Among the shows they have since produced are the animated series "Medical Island" (2003), "Ghost Messenger" (2010) and "Hanging on!" (2014). They also ventured into video games and webtoons, and notably contributed animated cinematics to the phenomenon Korean MMO video game Maple Story. "Beauty Water" is Cho’s feature debut, adapted from an episode of Oh Seong-dae’s webtoon "Tales of the Unusual".