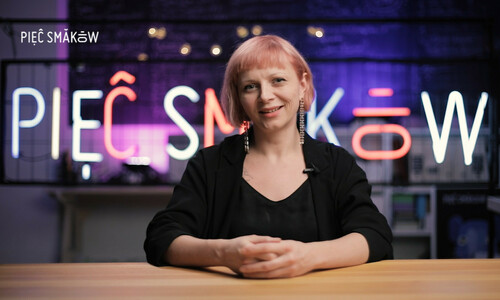 Just as the ratings of Rafflesii Pong’s cultural show are on their last legs, its guest, an avant-garde poet, decides to kick the bucket in front of the cameras. The sensation-craved corporate media are ecstatic, which the cunning reporter uses to her advantage. But her success philosophy seems to be completelyforeign to Eric – an idealist inventor who sneaks through the same corridors, and is completely incapable of promoting his life-changing products.

How to find your footing in a dog-eat-dog world of sales? And why does money only cling to the rich? This unique corporate musical is an intelligent, provocative satire about the modern reality, the economic elites andmass culture. Ironically, this absolutely cult Malaysian mixture of dynamic script, original protagonists andabsurd-ridden reality, was kept in the cinematic freezer for years due to corporate scuffles. In 2020, it comesback with a bang without losing any of its topicality. The dialogues, sharper than the edges of annual reports, will dazzle not only glass skyscrapers regulars.

Born 1969, worked for many years as a lawyer and advertising copywriter before becoming a filmmaker. He has made a wide range of films, from personal films to horrors. He wrote, produced and directed the only Malaysian films to have won awards at the Venice Film Festival: the Special Mention for his first short film, "Adults Only" (2006), and the Altre Visioni Award for his first feature film, "Sell Out!". Both have aired at numerous international film festivals and won other awards. He is currently waiting to resume production on "First Person Singular"  – a sequel of sorts to "Sell Out!".