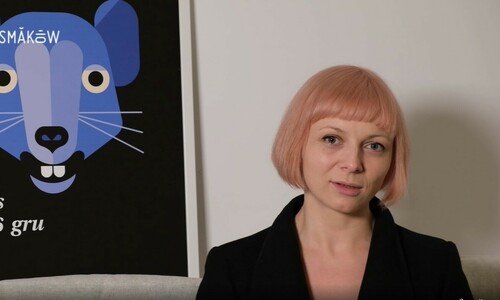 Long winter nights and days blinding with the light reflected off the snow, spent listening to and making tapes. An instant return to the 90s of a provincial, seaside town. As the second child in the family, the young girl, Gu Xi struggles with keeping her maid job at a hotel because her citizenship status is undocumented.
Her brother, Gu Liang, is a fisherman and the breadwinner in the family, their parents died in the indeterminately distant past. When an oil leak contaminates the shore and kills all the fish of the season, the siblings lose their main source of income. They accidentally meet and make friends with Qingchang, the daughter of Gu Xi's boss. Her father is willing to give Gu Liang, now a friend of the family, a job, but the legality of some of the tasks he is given is pretty suspicious. Emotions between the three young protagonists are running high when Qingchang and Gu Liang become a couple, and Gu Xi starts having serious doubts about her origins.

Northeastern China is the perfect backdrop for crime stories, as Diao Yi'nan has recently proven in his "Black Coal, Thin Ice," the Berlin Golden Bear winner. In his debut feature, Liang Ming sets the plot of "Wisdom Tooth" in Donggang in the Liaoning province, right next to the border with North Korea. The mysterious atmosphere of the place, covered in snow and ice, and the very ambiguous relationship between the siblings, set somewhere between the family and romantic love, have a powerful effect on the imagination. A tape from the past becomes the catalyst of the events. Gu Xi's limited knowledge and her obsessive search for the truth creates a unique sense of suspense. The film makes full use of the narrative potential of the place and time in which it is set – in the years 1977-2015, many Chinese parents from small towns and villages did not register their second children to avoid financial penalties of the One Child Policy.
The borderlines are also where fugitives from the neighboring country often end up. "Wisdom Tooth" is an ice labyrinth in which nothing is what it seems.

Born in 1984 in Yichun, Heilongjiang province in Northeastern China. Trained as an actor at Communication University of China, Liang Ming starred in several award-winning films including Lou Ye’s "Spring Fever" (2009 Cannes Competition) and "Shadow Days" (2014 Berlin Forum). He later turned his interests into directing, and worked as an assistant director on Lou Ye’s "Mystery" (2012 Un Certain Regard, Cannes Film Festival). "Wisdom Tooth" is Liang Ming’s directorial debut, and premiered at the 3rd Pingyao International Film Festival In 2019. The film won both Fei Mu Awards for Best Director (Chinese-language Competition) and Roberto Rossellini Awards for Jury Award (International Competition), a rare feat in the history of the festival.