We have presented almost 40 outstanding films!

The smell of the ocean breeze on the beach in Okinawa, the crunch of sand on a deserted Tibetan plateau, a flash of light on the glass of a Hong Kong skyscraper: the diversity of Asian landscapes is reflected in its rich cinematography, surprising us with a whole palette of experiences.

The Five Flavours Asian Film Festival offers a wide and unique review of the cinema from this dynamically developing continent which presents films unavailable in regular distribution, selected from hundreds of productions which currently captivate the screens of the Far East.

Asia has become the filmmaking capital of the world with most of todays new films getting shot there: from bittersweet images of the emotional life  of urban hipsters’ through touching stories of growing up in Indian villages surrounded with wild grasses to bloodcurdling tales about legendary Thai spectres. And this is only the beginning: brilliant screenplays and enchanting images will lead the audience into the candy-coloured universe of Asian pop culture; will allow them to look at local reality from a non-tourist perspective and open the space for debates on social and political challenges of the contemporary world.

This year, as always, the festival will provide an opportunity to discover original voices of young and recognized directors from South Korea, Bhutan, Thailand and Vietnam. We will explore the charms and ills of Japanese peripheries: its harbour cities, outskirts and marginal territories. We will watch films reached high critical acclaim by the Asian Film Awards Academy. Special consideration will be given to Hong Kong, which today is experiencing a serious political crisis: our guest will be Fruit Chan, a star of Hong Kong's independent cinema. However, our programme also has a place for fierce genre cinema: horror, action, perverse comedies are an ideal remedy for the November weather in Warsaw. There will also be a unique opportunity to see a premiere screening of "The Taste of Pho" and to meet the authors of the film.

For us cinema exist as a space of encounters: between cultures, generations, various views on the world, art and other people. This is the concept behind our festival, which is why we resign from red carpets in favour of long talks after the screenings, passionate discussions in the corridors, meetings with guests who do not hesitate to reach for the most bizarre aesthetics and the most urgent themes. We undermine stereotypes, seek first-hand knowledge and stand for high quality entertainment, often with an underlying message.

Like every year the competition section presents challenging, daring films, boldly combining genre cinema with social sensibility. A cross-section of the cinematographies of East and Southeast Asia: from India and Vietnam to Bhutan and Taiwan. The films cover local themes and topics widely discussed around the world, as well as touching personal and family stories.

The Grand Prix will be awarded by People’s Jury – a group of amateurs and semi-professionals whose sincere love of cinema and Asia combined with advanced journalistic skills will allow them to make competent assessment of the competition films and choose the winner of the Festival.

The cinema of Japanese peripheries – seriously and with a grain of salt. A chance to meet the inhabitants of the city outskirts and small towns, who deal with everyday challenges, look for love and try to find a balance between traditional customs a modern lifestyle. The filmmakers who reach for themes and aesthetic choices absent in the mainstream, and have bold, unconventional ideas on the use of genre cinema schemes.

A review of the works by the Hong Kong visionary who uses an original way of combining political topics with eroticism, crosses the borders of aesthetics and astonishingly portraits the multiethnic, modern-traditional, eastern-western society of the metropolis.

All the best from the Asian mainstream cinema: authorial views on reality and original approaches to genre conventions, in other words – the films nominated and awarded by Asian Film Awards Academy.

Exceptional filmmakers connected with the festival for years and their most recent productions: inventive narrations, captivating frames and astonishing themes.

Encounters at the crossroads of cultures: Polish cinema in dialogue with Asia.

A good news to all those happy to spend whole days at screening rooms and breathe joyous festival atmosphere – this year there will be more screenings than in the previous editions. Since Thursday, 14 November, till Sunday, 17 November, the screenings start in the morning and finish late at night. During the following days the screenings also start earlier than in the past years. 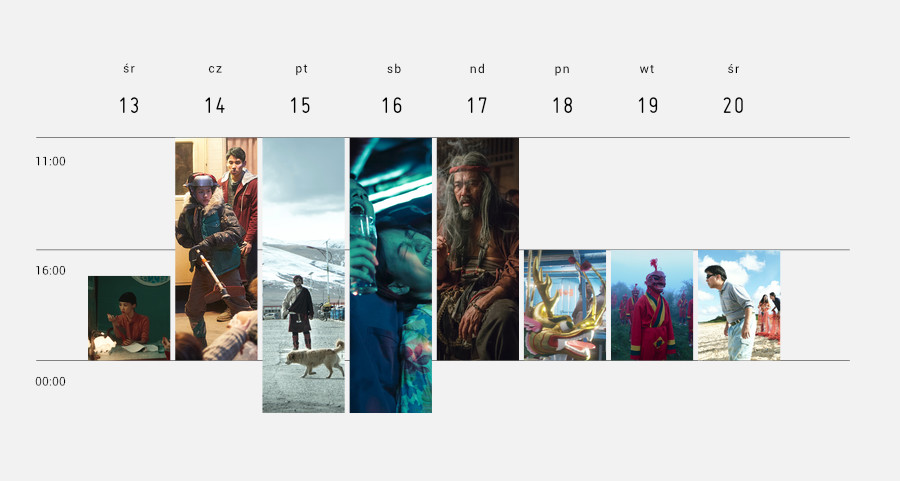 It definitely is worth to reserve enough time for an Asian Cinema adventure. This year’s programme is really unique!

For years, festival's film programme has been accompanied by a series of meetings which deepen understanding of festival films. It is an opportunity to learn about socio-cultural contexts, aesthetic traditions, relations between cinema and everyday life and current events in Asia. The 2019 Asian Academy looked slightly different than usual. Based on the feedback from previous year's audience, we decided to facilitate access to all events and moved it to festival's cinema.

The 3rd edition of Five Flavours’ younger sister, a music festival Radio Asia, took place on 4 - 8 December 2018. The programme is published at the radioazja.pl.

The festival in Wrocław

The Wrocław edition, held in Kino Nowe Horyzonty, was scheduled for 15-17 November.