Nguyen-Vo Nghien-Minh's film opened the Berlin Panorama section, which presents the most interesting developments in the world auteur cinema.

Nước is the second feature film of the Vietnamese filmmaker. The previous one, “The Buffalo Boy” (“Mùa len trâu”), shown at the 2nd edition of Five Flavours, received a number of awards on international festivals and was the Vietnamese candidate for the Oscars.

The director, born in 1956, in his youth emigrated from Vietnam to France, where he studied engineering, and then moved to the US to write a PhD in physics. For many years he studied the interactions between light and sound. It is not surprising, then, that his film is the first Vietnamese science-fiction, with additional ecological subtexts on top of that.

The film is set in 2030. Due to global warming and the raised level of the oceans, a large portion of Southern Vietnam is under water. This is the scenery for the story of three protagonists, facing the hardship of living on water platforms and struggling with their own past. We first see the situation from the perspective of Sao (Quynh Hoa), whose husband dies in mysterious circumstances. Initially, we perceive her as the victim of the circumstances, but this illusion is soon lifted – she is a strong, complex character, one of the most fascinating female protagonists in contemporary Vietnamese cinema. 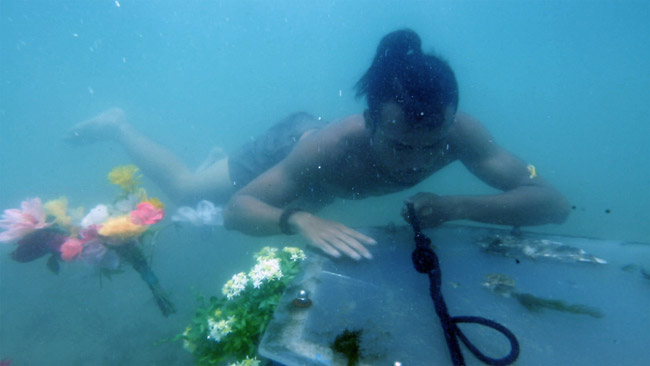 The screenplay is divided into just a handful of characters, but the intimacy of their drama is undermined by panoramic shots of sea waves melting with the horizon. The original title means “water,” which is an additional character in itself – a threatening element which takes away hope, but which also mirrors the emotional states of the protagonists. To shoot underwater, the director had to learn to dive (the limited budget did not allow him to hire a professional cinematographer), and his sacrifice resulted in very interesting effects. The photography is raw, not excessively stylized – perhaps that is why they are so impressive. Quynh Hoa also had to undergo a full diving training. At a press conference, the actress admitted that before accepting the part she couldn't even swim. It is very hard to believe watching her powerful character, for whom water seems like a natural habitat.

Nước has also another meaning – the word can be translated as nation or country. The film is not devoid of a political context. Although the melodramatic motive is the dominant thread, the reflections on the functioning of society and the mechanisms of survival are also present. This message is especially strong in the context of the real-life scientific prognoses of the dangers for this region, on which the screenplay was based.