The most beautiful romance in history. „In the Mood for Love” in cinemas on February 25

"In the Mood for Love" directed by Wong Kar Wai, the master of Hong Kong cinema, is the most sensuous romance in the history of film. Twenty years after its premiere, this visual phenomenon gets a second life thanks to the beautifully restored 4K version.

Mr. Chow and Mrs. Chan – played by the legends of Hong Kong cinema, Tony Leung and Maggie Cheung – live in the rented rooms of two adjacent flats. The journalist with a perfect hairdo and the elegant secretary in ideally fitted dresses pass each other on the stairs, exchanging vague niceties. Until they discover that their spouses are having an affair. Their silent agreement becomes the basis for a relationship which should not have happened at that place and time.

"In the Mood for Love" is a poem about unfulfilled desires and acute loneliness, one of the key pictures in the history of cinema, masterfully sewn together using shadows and mirror images, recreating the energy of Hong Kong of the 1960s through spaces filled with a dense, seductive red. It the narrow halls, Wong Kar Wai stages a piercing play of passing, a pantomime of hidden glances and gestures, portrayed in the rhythm of an ominously looped waltz.

The film is also the love child of the artistic explorations of three extraordinarily sensitive artists – set and costume designer and editor William Chang, and cinematographers Lee Ping Bing and Christopher Doyle, who joined Wong Kar Wai in creating a timeless audiovisual masterpiece, awarded with a Technical Grand Prize in Cannes. The echoing snapshots of roads not taken captured by the eye of the camera, the silhouettes of lonely hearts drifting in stunningly melancholic slow motion, and the floral qipaos worn by Maggie Cheung – these elements create the beautiful puzzle we associate with "In the Mood for Love," the most beautiful romance in history.

The thick cigarette smoke filling the frames, the ornamental wallpapers and jade cups create the background for the piercing nostalgia – the longing for something that is gone and something that never was. This is an especially personal film for Wong Kar Wai – it plays out the feeling of loss which he experienced but does not remember, since he came to Hong Kong with his parents as a small child.

"We repeat the music, the angle of a location, always the clock, always the corridor, always the staircase. Because I want to show nothing changes, except the emotions of these two persons," said Wong Kar Wai.

More about the film

"In the Mood for Love" is one of the five restored films in the Wong Kar Wai 4K program presented in Polish cinemas. It is a unique opportunity to experience the magic of the Hongkong master cinema on a big screen, in the best quality.

Films in the program:

More about the program 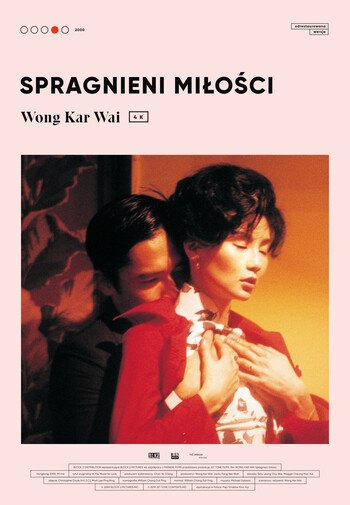