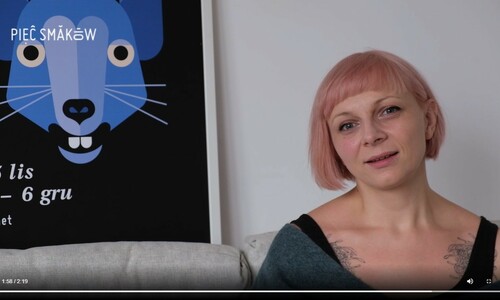 When a famous director's producer makes her own debut set in the film industry, everyone expects hot behind-the-scenes gossip about their cooperation. In this case, they will be disappointed. In "Lucky Chan-sil" the famous director suddenly dies of a heart attack during the opening credits. His producer, Chan-sil, an energetic, optimistic woman in her forties, is left without work and means of support. This is a big blow for a person who loves cinema and devoted her whole life to it – she never started her own family or worked in a different field. Now she has to build a new, better life for herself from scratch. For starters, she moves to
a far less prestigious district and starts cleaning the house a slightly unstable actress. There, she meets a short film director making a living teaching French, and she starts seeing the ghost of Leslie Cheung. Is there really a life after working on a film set?

For years, Kim Cho-hee was producing the films of Hong Sang-soo, the star of indie Korean cinema, but she decided to make her directorial debut without waiting for his departure. And rightly so – "Lucky Chan-sil" is a bitter-warm story, written with lightness and a unique psychological sensitivity, and a reflection on the situation of women in the Korean society, which is still very patriarchal. It is also an insight into the world of indie Korean cinema, with numerous references to the works of other filmmakers (including Hong's), but in her debut feature, Kim is already speaking in her own, distinct voice.

Born in 1975. She majored in French literature in her undergraduate studies and film theory at Université de Paris, Panthéon Sorbonne for her master's. From 2008 to 2015, she worked as the producer of Hong Sang-soo in 10 of his films, and numerous short films she made entered various film festivals both in and outside of Korea. Kim Cho-hee makes her writing/directing feature debut with Lucky Chan-sil, winner of the Busan International Film Festival KBS Independent Film Award at the Busan International Film Festival.