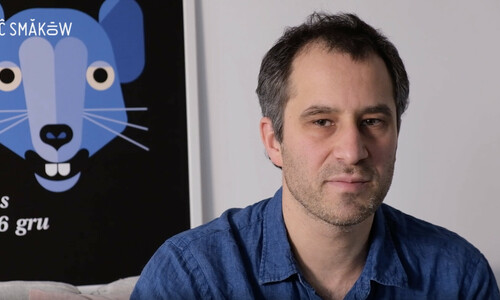 Beasts stay in hiding, looking for the right time to attack... When a simple sauna employee finds a client's lost Louis Vuitton bag filled with cash and decides to keep it, he has no idea he is letting the beast loose, putting himself and his family in mortal danger. He has to face people possessed by greed who will stop at nothing to corner their victim and get the money back. Mobsters, corrupt officials, desperados, femmes fatales – the fate will bring them all together, leading to
a brutal and inevitable confrontation. All that matters in the urban jungle is being cunning and unscrupulous. Hope is nothing but a trembling reflection in a puddle in a dark street flooded with blood-red neon light.

"Beasts Clawing at Straws" is a steady-handed adaptation of a Japanese noir novel by Keisuke Sone, eloquently juggling generic tropes and surprising the audience every step of the way. The script keeps intertweaving the unique characters' plots tighter and tighter, turning the pace up all the way to the dramatic finale. Beautifully filmed in strong contrasts, powerful, bloody, and wonderfully played – Kim Yong-hoon debut feature is the best thriller of the season.

Born in 1981. Graduated from Kookmin University. He directed KBS documentary "Sympathy-Three Guys Who Went to South America" in 2013. He has been working at CJ Entertainment since 2008, and had progressed investment of "The Berlin File", "Miss Granny" and "C’est Si Bon". "Beasts Clawing at Straws" are his feature debut.