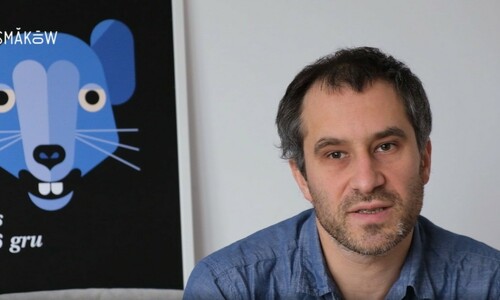 In the early 1997, Hong Kong is still a British colony and a local economic power, but it will all change in just six months. Three legendary local gangsters know it all too well. Each of them specializes in a different type of crime, but they all have to reorganize to adjust to the new situation. When a rumor about one final score before the transition starts circling the underworld, Cheuk Tsz-keung decides to get in touch with his fellow mobsters...

Johnnie To invited three young filmmakers, who proved themselves in his Fresh Wave program, to direct the three intertwining stories of "Trivisa." Frank Hui, Jevons Au, and Vicky Wong were supposed to continue the work of their master, but "Trivisa" turned out to be a powerful, stylish, and humorous farewell to Hong Kong's true gangster films, one of the craziest and most inspiring genres in contemporary cinema. Once again we can see the familiar faces from the Milkyway Studio productions, flooded by the blood-red light in the streets where no one can be trusted… Nobody makes films like this anymore.

Graduated from the Directing department in the School of Film and TV at Hong Kong Academy for Performing Arts. He wrote and directed the short film, "Merry X'mas" which won the 2nd Fresh Wave Short Film Competition of Hong Kong International Film Festival in 2007.

Born in 1980 in Hong Kong. He graduated from Hong Kong Academy for Performing Arts in 2005, since then he directed various short films.

Wong studied in the Department of Journalism and Mass Communication at Hong Kong Shue Yan University. He worked professionally as a filmmaker in broadcast and independent production for several years before deciding to further his career by studying filmmaking in UK. He studied at London Film Academy. His most successful short film is "Decisive Moment" which won Best Cinematography award at Fresh Wave 2010, which led him to be picked by Johnnie To as one of the three directors of "Trivisa".